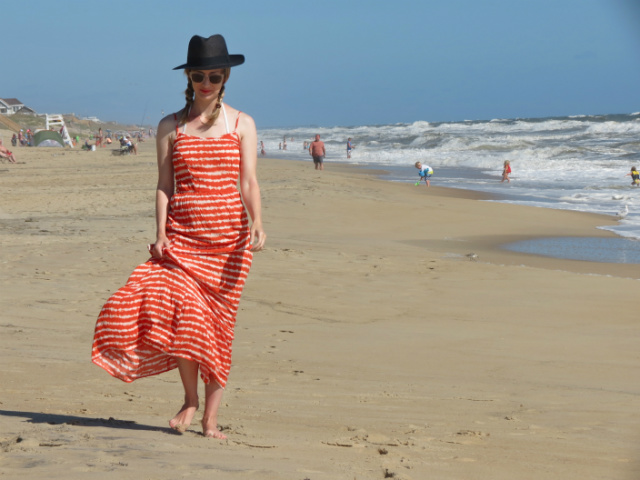 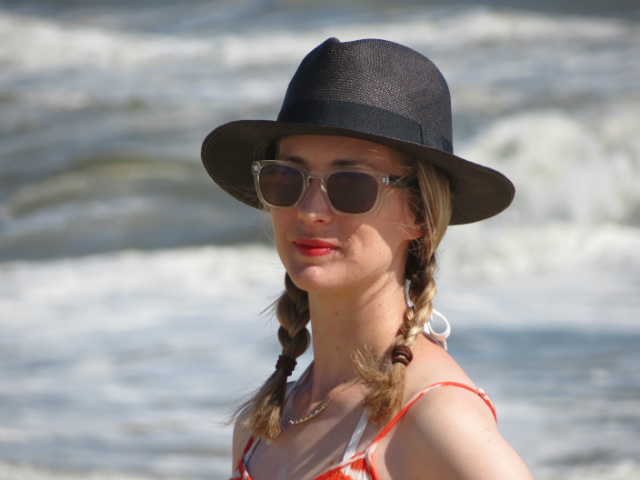 My vacation is coming to a close, but I’m not ready to accept it yet. So instead let’s admire these photos from earlier in the week when we took a walk down the beach to the pier. Naturally, once we got there, we sang the Dawson’s Creek theme song. Not exactly the same pier, but close enough.

A couple days before we left for vacation, I realized I didn’t really have a cute coverup, so I went to Target to grab one. There aren’t a lot of options left at the end of August, but I found this maxi dress on the clearance rack. I didn’t even try it on. I was very pleasantly surprised to find that it fit like a glove. I wore it for several hours on the beach, went inside to shower, and put it back on for dinner. Don’t be surprised if you see me wearing it again before summer is out! 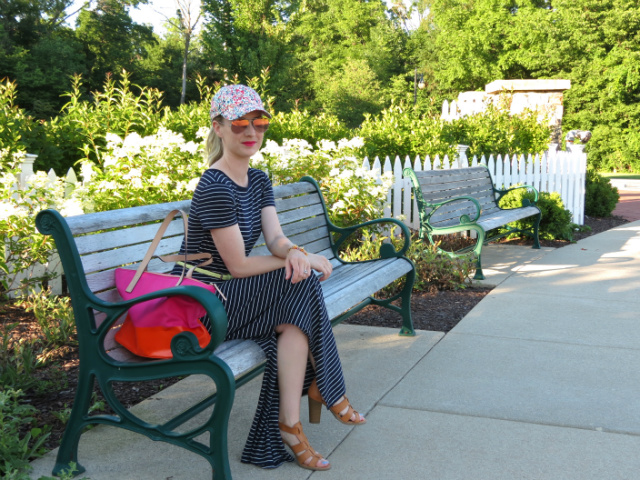 I just got this dress a few days ago. I’d been eyeing it in Target over and over and I decided it would be a great option for Test Day! Both test days, actually (yep, the Bar Exam takes 2 whole days – joy). I really don’t like to wear jeans for long periods of sitting because the waist band can get uncomfortable and make me very conscious of how much I have to pee. I don’t have any medical evidence to prove it, but I think my bladder is the size of a lima bean. Point is: Dresses are way more comfortable and convenient.  More reasons this dress is perfect: (1) It feels like a nightgown but looks stylish, (2) it has stripes – my favorite print, (3) the maxi length will keep my legs from getting goosebumps if it’s drafty in the testing room, and (4) it was only $30. As you can see, I thought this purchase through. Here’s hoping I can use this same logical brain power on July 29 and 30!

In case you don’t live in Indiana and/or don’t follow the news, yesterday Indiana became the latest state to have its same-sex marriage ban overturned by a federal judge. The judge didn’t put a stay on the ruling, meaning many county clerks started issuing marriage licenses right away! This ruling is likely to be put on hold soon while the decision gets appealed, so a crap ton of excited couples swarmed the clerk’s office here in Indianapolis to get hitched while they still could.

Well…we were one of those couples!!!

My wife Kristin and I had a wedding ceremony (you know…pretty dresses, vows, cake, dancing, etc.) almost 3 years ago but we never made it legal until now so we’re pretty excited. Our original wedding is still our “real” anniversary in our eyes, but I’m glad we took advantage of this awesome opportunity to be a part of history! There were so many happy people there with their friends and family, and every time a couple walked down the hall with their marriage certificate, the crowd clapped. (I felt like a celebrity. It was pretty awesome.)

left to right: waiting in line; finally getting to the doors of the clerk’s office, filling out our application (YAY!)

Just to be clear, being a part of history is not quite as romantic as it sounds. We stood in line in a hot hallway for nearly 3 hours. No flowers, no music, no wedding party. We exchanged generic vows in a tiny office with someone we didn’t know. But hey, the important part of marriage isn’t the wedding day; it’s the rest of your lives. I already knew that, but yesterday was a good reminder.

The best part of the whole experience was the fact that everyone at the Clerk’s Office was amazing. We were in there at 8:30 PM, and they didn’t seem at all upset that they were supposed to have clocked out 4 hours earlier. The County Clerk Elizabeth White was walking around, personally congratulating couples, including us. People were upbeat and seemed legitimately happy to be there. Judging by the line that was still there when we left at 9:00, they still had a couple hours ahead of them!

Even the police officer who was controlling the crowds was awesome. He said things like, “I know it’s hot in here, but love is worth the heat, right?” So adorable.

Now to the part you really want to see…what I wore! This is really something I would have worn on any random day, but the fact that I got married in it makes it special, right?

I don’t even feel conceited when I tell you that I felt like a total babe in this dress. And for the record, it shouldn’t make any woman feel stuck up or narcissistic to make herself feel gorgeous and confident and to acknowledge that feeling. You hear that, ladies? Maybe other people will notice; maybe they won’t. It doesn’t matter. When I wore this on Saturday afternoon, no one told me I looked good, but I felt amazing, and I’m glad I have this blog so I can relive that feeling now!

Part of the reason I’m gushing so much is that it’s a pretty rare occurrence for me to wear something strapless, much less feel confident in something strapless. Or a halter top, or spaghetti straps, or even fettucini straps. I’m pretty insecure about my skin – it’s always blotchy and breakout-prone, and those things are a lot more obvious on someone with fair skin like me. So when my chest and back are showing, I feel self-conscious.

I realize my skin looks totally normal in these photos…I swear I’m not crazy, and I didn’t Photoshop these. We have some flattering light and a not-too-sharp focus to thank. You’ll just have to trust me when I say that this is a pretty special occasion and a pretty special dress. Since I love it so much, I should probably give a shout out to the company that sent it to me: Kika is a mother-daughter business in Los Angeles that sells American-made, eco-friendly clothing. If this dress is any indication, their stuff is insanely soft, comfortable, well-made, and pretty.

So. Life lesson of the day is: Wear what makes you feel great, and stop worrying about perfection. I’m mainly talking to myself here, but if it resonates with anyone else, even better. 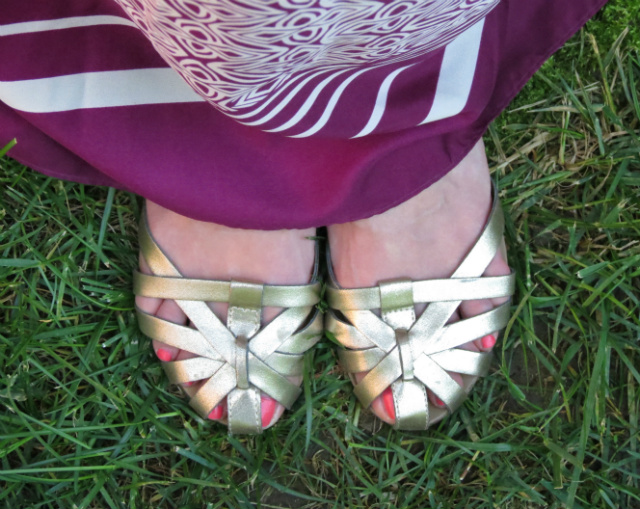 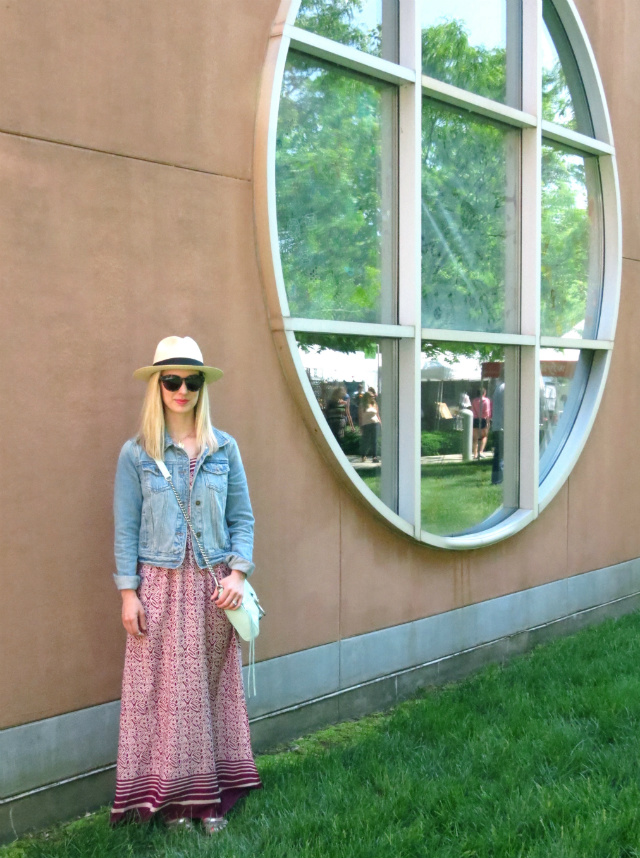 OK, here’s what happened while I was getting this post ready: I was resizing these photos and saving them under new file names. I wore this to the Broad Ripple Art Fair over the weekend, so I was naming the files “artfair1,” “artfair2,” etc. Meanwhile, in my head I was thinking of genius things to write (per usual).

Then apparently my fingers got ahead of my brain because I typed “fartfair” for one of the file names, and I laughed so hard that all my genius ideas disappeared. I think you’ll agree that’s a totally normal adult response, so you’ll forgive me for my lack of relevant commentary today. 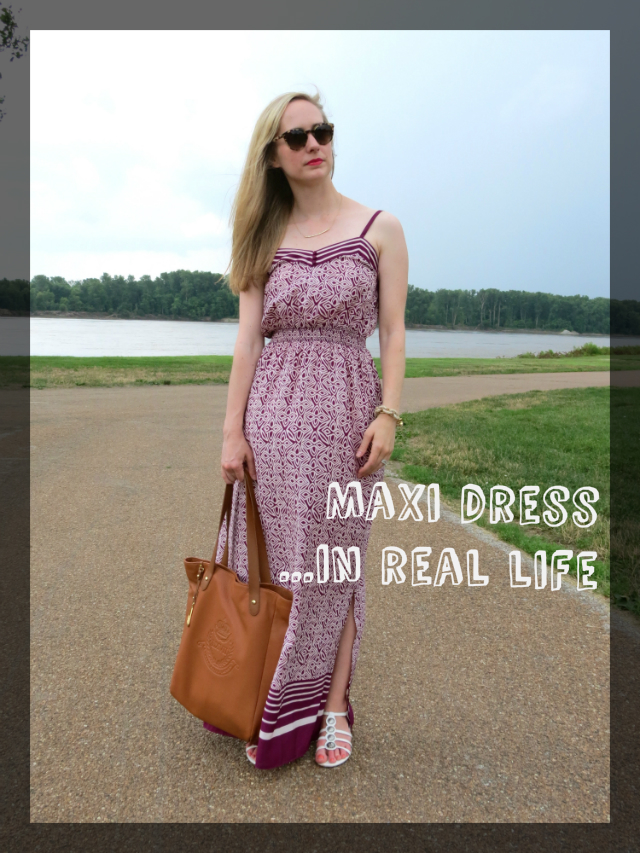 Why, hello there! Long time, no outfit, huh? I hope you didn’t miss me too much during my 4-day hiatus (that’s a long one for me). Sadly, my grandma died last Thursday, and my meticulously planned schedule went out the window when I had to fly to North Carolina for the funeral. Normally, I’m glued to my phone and/or computer, always editing photos and writing posts and updating social media no matter how busy I am with other things. But when I was back home with my family, sharing tissues and happy memories, blogging was the farthest thing from my mind.

I know everyone thinks their grandma was the best, but mine seriously was. So even though I’m pretty sure my grandma didn’t know what a blog was, today’s post is dedicated to her. When I was a little girl and I put on a dress to go to church, my grandma would always gush over how “darling” I looked. At the time, I hated it because I didn’t want to look darling – I wanted to look grown-up! But when I put on this dress on Saturday, I couldn’t help but imagine my grandma telling me how darling I looked – and I would have loved to hear it!

Alright, I’m not wearing waterproof mascara, so that’s enough of that for now. Because of my long absence, I’m extending the Flourish Boutique giveaway through the end of the day today (Thursday). Be sure to enter!